The Beginning of a Great Week

I am so excited about our weather this week. For the first time in months we will be in the 40's. It's been a dragging winter around here and I know our weather has been mild compared to most of the country. The robins are in the yard, the geese are flying high overhead and most of the snow has almost melted. We've had a few sunny days in a row and I can almost forget about the icky roads and snowy walk ways. Don't you just hate getting groceries and having to push the cart through slushy parking lots? I am thankful that I have a grocery store and money to fill the cart so I won't complain too much I guess!

I am happy to say I am finally unpacked. Everything is in it's place. The walls are all painted. The floors all cleaned. We just got the last load this weekend, believe it or not. I now have patio furniture (sitting on top of snow right now) and a guest bedroom ready for company. My friend Barb said it was the longest move in history and I think she's right. It took 2 months from start to finish. I'm so ready to move on and get to work full time, well, for a while, anyway. I am meeting my sister in New York in a few weeks for a little fun. We all need a break, right?

We have 2 winners for last week's drawing. For the Through The Year quilt series, the winner is Cindy from PA. The winner of the 6 Colors of ther Seasons charts is Suzzane from FL.

Congratulations ladies, I'll be sending them this week.

This week, I have 2 finished items up for anyone. The first is a wool design from one of my books. The table runner was made with Weeks Dye Works hand dyed wool. It's approximately 15" x 24". All you have to do is email me at PGPeddler@aol.com with the word "WOOL" in the title and your name and mailing address by next Saturday at midnight. 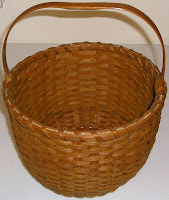 The second drawing is for an oak market basket that was made by me years ago. It's about 12-1/2" tall with handle. It has a beautiful color from aging and signed with the number #470 on the bottom. I made over 2000 baskets before I stopped selling them so this was an earlier one. It would make a great Easter basket, or floss and yarn holder. All you have to do to enter is email me at PGPeddler@aol.com with the word "OAK" in the title and your name and mailing address included by midnight Saturday. I will draw names next Sunday for both drawings.

OK, I said it. I'm pretty embarrassed because I can't find my camera. I know it's here but have no idea where "here" is. I really want to offer something special this week but I can't take a picture of it so it has to wait until next week. I do have things pretty well done around here now and my office is ship shape. You'd think I could find a little thing like a camera. I do have my mom's camera sitting here but no cords to use it. Next time I see her I can remedy that. For now, it's got to be another free pattern/ chart kind of drawing. Stay tuned for next week though.

Sorry for the delay in posting, as I babysat for the grandbabes all afternoon. I got two new rocker/ recliners this past Friday and I pretty much have been in mine ever since while home. My husband asked why I got two and I mentioned someone else would always be in it if I only got one! Having said that, he has been in "his" as much as I have been in mine this whole weekend. We got a lot of good reading done!

Saturday we went to an Indoor Garage Sale. We took a truck full of "stuff" and came home with less than 1/2 so it was successful! In my quest to downsize I am planning a few more this year!

This week, for Cross Stitchers- One winner this week.
One of each of the Colors of the Seasons cross stitch charts #2, 11, 12 14, 19, and 23. You can see them on the website at www.prairiegrovepeddler.com.
To enter, email me at PGPeddler@aol.com with "Colors" in the title. 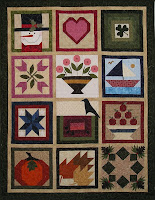 This week, for Quilters- One winner this week.
One complete set of Through The Year Series- 12 blocks of the month.
To enter, email me at PGPeddler@aol.com with "TTY" in the title.
Include name and mailing address.

We've got some Garden Hoppin' winners this morning!

Thanks to everyone who enters faithfully each week. If you haven't won anything yet, hang in there. Your luck is bound to change. I'll send these charts and patterns tomorrow. By the way, you can enter both contests, you don't have to choose one or the other.

I'll post a new contest later today. It has to be photographed and I don't want to be late for church as I sometimes am!
at 8:47 AM 4 comments:

Wow, I worked my little heart out yesterday and I'm almost done with all of the boxes. Things are looking pretty good and organized and it just feels so good. I can actually find things and see where they are. Imagine that! I used lots of plastic tubs this time and they look very organized on the s 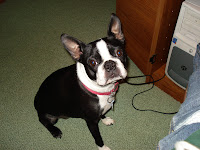 helves. I'll try to remember to take a picture later.
Here's our sweet Layla, my shadow on occasion. I didn't remember to take her picture when she was here so Kirk sent me one. She's a cutie!
Barbara, your tulip quilt is on the way to England.
at 6:10 AM 3 comments:

Barbara let me know that she was thrilled to win the tulip quilt on her Birthday! How cool is that? So, Happy Birthday Barbara!

I am working on a couple of new cross stitch designs to release very soon. I hated to miss the Nashville Show this week but I knew with moving I would not be ready in time.

It's so quiet around here today. We were doggie sitting our son's Boston Terrier for the last four days while they went skiing and now she's gone home. I was just getting used to having a shadow, literally with every step! Maybe now I can get some work done!
at 11:40 AM 2 comments:

Well, sorry for the delay in posting. I had a winner this morning but I had to decide whether I wanted to post it or get to church on time. Church won! The winner of the finished Tulip quilt is Barbara from England. Congratulations Barbara, I'll ship it to you this week.

I had a great week unpacking. I found so many interesting things that have been packed
up for years. I have boxes of old dolls and critters from the craze

years ago. Some are my designs and most were acquired from friends. I decided to line a shelf in my office with them.
I know, I could just get rid of them but they just look so cute. Sometimes I wish dolls would make a come back but I know the country look passed a long time ago. I still hold some of them close to my heart. I started craft fairs in 1990 with hand made baskets and dolls. It

was such a fun time for craft fairs.


I still have Attic Babies

- remember them? I have a few more up in the kids toy room but I now have four in my office. I got all of mine autographed one year when Marty Maschino was here at a local outdoor weekend fair called the Festival of the Little Hills in old St. C 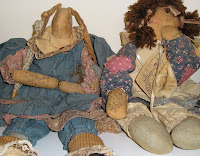 harles. My cousin Beth and I used to do that show in August. It was a hot time, let me tell you, but a great street fair. I think it still runs every year in August. I don't think I've been back to it since I moved away from St. Louis.


I finally got around to taking a picture of my old Brownie Fiesta camera. I got it one year before a vacation. When I was 14 yrs old, I was in love with Peter Duel of the TV show Alias Smith an

d Jones. That summer we went to CA on vacation and went to Universal Studios. I actually saw him in person. I got a good picture of him on his horse and I still have the picture in my scrapbook. I was so in love, then he killed himself and the series ended. My dream was gone!

For this weeks drawing, I thought in honor of Spring coming, I would do something very Springy. 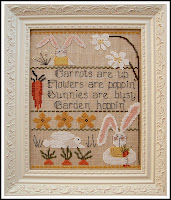 For Cross Stitchers, 3 winners, for Garden Hoppin' cross stitch chart #13.
Email me at PGPeddler@aol.com with "CS Hoppin" in the title by midnight Saturday. Be sure to put your name and address in the email. Those without are not considered.

For Quilters, also 3 winners this week, email me at PGPeddler@aol.com with "Quilt Hoppin" 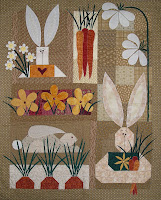 in the title by midnight Saturday.
Be sure to put your name and address in the email. Those without are not considered.

I'm back to normal ( as normal as I can get) after the fall last week but I do still have a dent across my nose! The wound on my leg got infected but a trip to Urgent Care last Tuesday took care of it! Thanks for all of the sweet emails I got from everyone. I really appreciate them all.
at 3:06 PM 6 comments:

I Lost It Again!

Not only did I loose a whole month of January but I lost last week also. Where does the time go? Seems like it was just Christmas and my life is a blur these days. Believe it or not, I'm STILL not done unpacking. I know, the word Pack Rat comes to mind again. Honestly, I wor 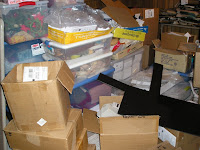 k at this everyday! Maybe I'm getting slow in my old age. Here's a picture of some of the mess I have been going through. It looks better now but I'm not done yet.

Friday evening I was carrying a box of tiny little screws and nails, and it was a actually a pretty good size box. Of course, I could not see where I was going because I was looking at the contents. I tripped over a shelf board that was conveniently left leaning against a table along the floor. Unfortunately, I was the one who left it there so I couldn't even blame anyone. Not only did I trip and land head first into the floor, but I dumped the entire box everywhere and beat myself up at the same time. I didn' t break anything but I have a lot of rug burns and a beautiful long scrape down my shin. I also have a dent across my swollen nose from the reading glasses I had on at the time. Hopefully in time it will go away.

I did get to rest the remainder of the weekend! It was much needed. I got a lot of attention from my grandkids all weekend also! My wonderful son came and picked up all of screws and nails for me.

I am back to moving around today so I wanted to offer a new drawing this week. I know I'm a little late this week but better late than never. I guess I have Spring Fever!
For the week, open to everyone, I 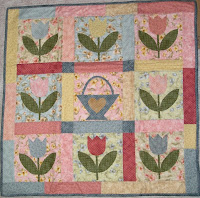 'm offering a finished and quilted spring wall quilt from my pattern Tulip Thyme. It is made with Nancy Halvorsen fabrics.

Email me by Saturday at midnight at PGPeddler@aol.com.
Put the word "Tulip" in the title.
Include your name and mailing address. I will choose a lucky winner on Sunday.
at 5:02 PM 5 comments: