The Heat is On!

A full week of 90 temps coming up. Last week was the same. We sort of missed our Spring. We went from cold and wet to hot (and wet). A little fertilizer on the corn and tomatoes and we're in good shape. I counted 65 tomatoes on the vine so far. Yum! I know, you'd think I'd have better things to do than go count green tomatoes but it was exciting, none the less. 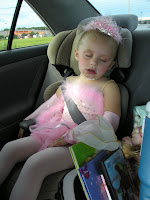 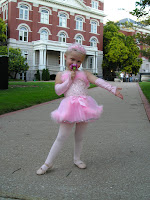 Grace had her first dance recital this weekend and despite
falling asleep on the way, she performed very well. The whole
group was as cute as could be! She's been singing and dancing around the house ever since. Sarah got her a peacock outfit at a garage sale and she is the princess, let me tell you. Tail feathers and all. She makes up her own songs and sings and sings!

Here's a picture
of Sarah and Grace. 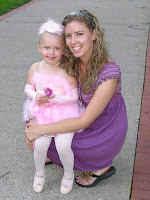 My sister was in an accident this past week and broke a bone in her neck. She had a successful surgery and now has a halo bolted to her for 8 weeks. You'd think wearing a halo would make her feel like an angel but I'm not sure she feels quite that way. Keep her in your prayers!
at 10:34 AM 4 comments:

Just Another Hot Friday In The Summer

Another week has passed and I really believe the summer is going to be over in no time. The corn is growing, we have 56 green tomatoes growing on the vines so far and the flowers had to be pinched back already.

Tomorrow there's an auction at the next farm down the road. I told my husband we should go over there for lunch, you know there will be a hot dog stand! It's a funny story abut that farm really. They had an old huge white dog, probably a Great Pyrenees. He came over to our house on a regular basis and left his "special package" in our yard.

Every morning I would leave very early to go walk in town, and he would be laying somewhere along the road. The bad part, was that there was a sharp curve in front of his house, and that's always where he would sleep in the road. I kept thinking someone coming through that area would not slow down if they didn't know he would be there.

One morning I left about 5:30 am. He was laying across the center of the road (and he was huge) and I just happened to be watching for him. He never moved a muscle as I drove around him. I was sure he was dead, probably hit by someone in the night. I told my family about it and I felt so sad that day, I just wanted to cry. I was sure he had died. The next day my son saw him laying in the yard and I was sure it was where they pulled him to get him away from the road. I started looking every time I drove by and still didn't see him anywhere. Even my husband saw him laying in the yard and still I looked, not finding him.

Well, finally, I saw him after about a week, alive and well. I don't know how he did it, but he was the luckiest dog around. After that, every time I drove past him laying in the road each morning I just smiled, so happy to see him alive and well and thankful some someone didn't fly through there in the night and hit him.

They have since moved on, hence the remaining auction tomorrow. It's sad now for me really, that each morning, I don't have that sweet old white dog to watch out for. I miss him! I don't miss his gifts in our yard, but I miss him!
at 1:01 PM 2 comments: